Consider some features and some labels .

Then, navigate the quagmire that is Python dependency management and survive having multiple versions of Python installed on your machine with your sanity mostly intact For this, the sanity maintenance I mean, I like a combination of pipenv for projects and pyenv for changing my global python version. .

What happens when you call LinearRegression().fit(X,y)?

In our last post, we derived the least squares normal equations.

So, from a theoretical standpoint you’d be 100% correct if you said, “Scikit-learn solves the least squares normal equations”. Good job. And to go further, you could talk about using different matrix factorizations to efficiently solve the normal equations, like SVD or QR or LU. But there’s a story we miss by ignoring the actual code and hardware that will solve least squares.

Like pretty much all modern software, Scikit-learn and its contemporaries stand on the shoulders of giants: NASA’s Jet Propulsion Laboratory, Oak Ridge National Laboratory, and work done in the 70s to revolutionize scientific computing.

Understanding this work and its modern forms is critical to an end-to-end understanding of why your 2015 Macbook is burning the tops of your thighs as you run an ill advised regression for a term paper. This is not a particularly technical post, as I don’t think I could do justice to the hardware optimizations involved. Instead, we’ll dig into modern linear regression as a way to develop a mental picture of the structures involved.

A cursory examination of the code for scipy.linalg.lstsq reveals that it…doesn’t do anything? It checks for any mismatch in the shapes of the input, but there’s no matrix factoring, not even a dot product.

Rather than performing the calculations itself, SciPy actually calls a LAPACK subroutine to do all the matrix factoring work. Which subroutine depends on which option you pass to it: “gelsd” for divide-and-conquer SVD, “gelsy” for complete orthogonal factorization, or “gels” for QR/LQ factorization. LAPACK in turn calls a BLAS subroutine to do all the scalar, vector, and matrix work. These programs are very particular. Different architectures will have different implementations. Some of the really-fast implementations were hand-written by a guy on sabbatical from the Japanese Patent Office.

LAPACK was a project out of Tennessee and Rice Universities, the Numerical Algorithms Group, a private non-profit, and Oak Ridge and Argonne National Laboratories in the early 90s. This assemblage of researchers all saw the need for a standardized, fast package that provided “routines for solving systems of simultaneous linear equations, least-squares solutions of overdetermined systems of equations, and eigenvalue problems. ”

These sorts of things had been tried before in LINPACK and EISPACK, but those packages weren’t written with modern computer architectures in mind. The original Intel Pentium chip had come out in 1993 and brought a split L1 cache If you have a rough idea of what an L1 cache is, here’s an insanely thorough StackOverflow on what a split L1 does. into the mainstream At the time, Intel was facing competition from a company called Cyrix, who was also releasing some very nice x86 chips. But then, Quake was released by id Software, which targeted the Pentium processor’s ability to interleave floating point and integer operations, something Cyrix’s chips couldn’t do. “Quake was extremely popular, and everyone used it in their performance tests – and thus hammered the Cyrix chips, even though the Cyrix was faster in ordinary use, in business/work/Windows operation, indeed in every other game except Quake. And ultimately that killed Cyrix off.” From here Did you know x86 just means a system that’s compatible with the instruction set first used on the Intel 8086 chip, the precursor to the Pentium? I didn’t. Well, now I do. Such is the epistemic problem of writing a blog post in order to learn about what you’re writing about. . The basic problem here is that CPUs got quite fast at multiplying numbers, but accessing those numbers from memory hadn’t kept up. So, programs that didn’t pay attention to the cost of moving data started being bottlenecked by the speed of memory access rather than the speed of their processors.

LAPACK was written in FORTRAN 77 for modern memory hierarchies with multiple parallel, processors; and that made it stupid fast. Of course, you can’t write a library that’ll be optimal for all architectures. You have different cache sizes; you might have an L3 or L4 cache. But LAPACK didn’t need to, because it wasn’t actually doing the low-level calculations. For that, it relied on whatever Basic Linear Algebra Subroutines—BLAS Obviously. Honestly, I’m way more in on the all-cap, pronounceable acronym, compared to like, the current state of open source naming. I mean look at the list of projects under the Apache Foundation. What is this…{% preview http://guacamole.apache.org/ %} Guacamole {% endpreview %}? {% preview http://kafka.apache.org/ %} Kafka {% endpreview %}? Oh God, there’s a project called {% preview http://chemistry.apache.org/ %} Chemistry {% endpreview %}, please let it have something to do with—No. From its homepage: “Important time-saving note for chemists: the Apache Chemistry project has nothing to do with chemistry or chemicals!” It’s a CMS interoperability standard. And Steve? Steve is the Foundation’s python-based voting system. — the user had installed.

In the late 70s, the nerds at JPL came out with a FORTRAN library of thirty-eight basic linear algebra subroutines. Stuff like a dot-product, implemented in a way that was fast and correct. This way an aeronautical engineer didn’t have to worry that his code for, like, a 2-norm A 2-norm is just the Euclidean distance of the vector. I have no idea how it should interact with complex numbers. This way, I don’t have to! handled a complex vector correctly. And that might mean fewer rocket crashes.

While it started out as an actual library, BLAS persisted more as a specification. Anyone could write a BLAS implementation that was fast on their hardware, and any program designed to use BLAS could use any of these implementations.

If you’re reading this on a Mac, you’re running Apple’s implementation of BLAS and LAPACK, specially optimized, like much of Apple software, for its own hardware.

This is the technical lesson sandwiched between some interesting history. LAPACK and BLAS take the same approach to speed at the algorithmic and operational level, respectively. That approach is This is straight from the LAPACK user manual .

Vectorization is taking advantage of hardware’s propensity for vector operations. You can multiply pairs of numbers together in a loop and sum them, but it will be faster if you compute a dot product on a row and column vector.

Data movement means from different levels of memory: disk to main memory to cache and in and out of registers. These all are all costly. You want to spend your time computing floating point operations, not accessing memory. These are a few of Jeff Dean’s “Numbers Everyone Should Know ”:

Parallelization is in the same vein as vectorization, but instead spreads a problem over multiple threads/processors. If there are large chunks of the problem that can be computed completely independently, you can reduce the time needed almost linearly in the number of threads.

This is all a lot of work. But there’s a useful idea here that some constructs are so widely used that it’s worth a lot of effort to eek out small performance gains which then aggregate to huge performance gains.

One example from a 2017 talk on Google’sDisclaimer: I work at Google. I was not involved in this work. efforts to develop faster, more efficient hash tables Source . This is a really excellent talk even if you’re not big on C++ internals. :

The same idea applies to a dot product. If your supercomputer weather simulation does a lot of dot products, you might save days of compute time by having a good BLAS implementation for your hardware.

This is where Mr. Kazushige Goto comes in.

The Man from the Patent Office 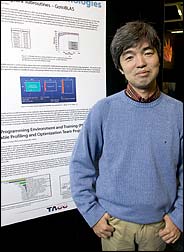 Prior to 2002, Kazushige Goto worked in the Japanese Patent Office. While he was there, he developed a knack for tinkering with the subroutines on computers to improve bottlenecks. I say this, of course, in the same sense that Babe Ruth developed a knack for hitting home runs. From a 2005 New York Times profile :

“To help in his work, Mr. Goto purchased a Digital Equipment workstation based on the Alpha microprocessor in 1994 to perform a simulation. But when it arrived he could not understand why it was performing so slowly. So he explored the Alpha’s design to see where the performance bottlenecks were.

He later purchased a second Alpha-based computer and by rewriting the crucial subroutines was able to improve its performance to 78 percent of its theoretical peak calculating speed, up from 44 percent.

Although he was not formally trained in computer or software design, he perfected his craft by learning from programmers on an Internet mailing list focusing on the Linux operating system for the Alpha chip. His curiosity quickly became a passion that he pursued in his free time and during his twice daily two-hour train commute between his job in Tokyo and his home in Kanagawa Prefecture.

‘I would frequently work on these problems until midnight,’ he said. ‘I did it to relax.’”

Naturally, this sort of hardware whispering doesn’t go unnoticed, and eventually Mr. Goto got the call up to the Texas Advanced Computer Center at UT Austin to apply his gifts to supercomputing while on sabbatical from the patent office. At the time of this profile, 4 out of the 11 fastest supercomputers were running GotoBLAS, Goto’s optimized implementation for Intel’s Nehalem processor.

Needless to say, I find this immensely aesthetic. The idea that deep learning, whose signature trait seems to be the ability to replicate those domains of man—art, perception, language—with all its forward pass matrix multiplications, might itself still be subservient to one man’s lonely craft. Of course, I expect ATLAS and its ilk to improve. Compilers, a related field, has already begun to cede territory to deep learning powered heuristics. But, you know, at least for a while, state of the art can be a man on a train before work.